My parents-in-law live in a sun flooded house in a cosy small town close to Kolkata. Whenever we go and visit them my mother-in-law makes a huge effort to feed us all kind of delicacies. There are local vegetables, duck eggs, small and big fishes and of course everybody’s favourite dish – chingri malai curry (prawns in coconut). The days pass with good food, visits to our relatives, short excursions to town and long afternoon naps. From time to time I get out my notebook to write down a recipe or note an idea. One of the easiest but most essential recipes I learned from Maa is the one for her garam masala. 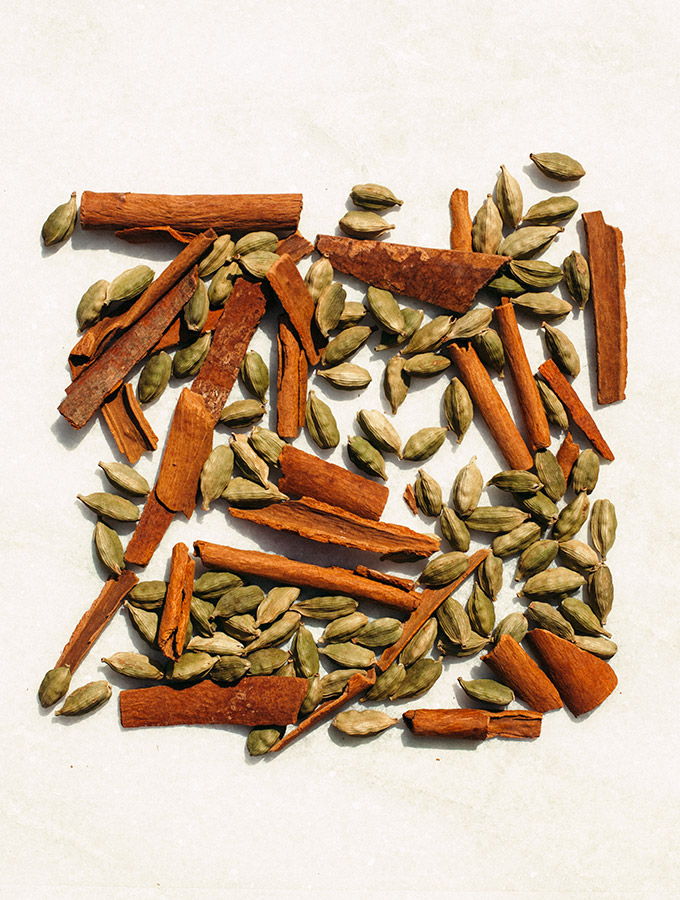 Garam masala is a spice blend widely used in India but it’s preparation varies very much from state to state, but in contrast to other spices mixes it is mainly used as a finishing spice at the end of cooking time. In Bengali cooking, spices are used more sparingly and the typical Bengali garam masala consists of cinnamon, cardamom and cloves. Maa only uses cinnamon and cardamon and instead of roasting the spices in the pan she dries them in the sun.

In India the sun plays an important role to prepare certain ingredients – in mountain regions like Kashmir vegetables and fruits are dried to preserve them for the harsh winter months. Achaars are traditionally fermented in the sun and papadums dried on rooftops. Often it’s said that the sun gives the dishes a special flavour and the romantic in me willingly believes that the soaked up sun rays will shine through the food and enhance every dish.

Ma’s garam masala is sweet & aromatic and a very universal spice mix. It does not only fit well with bengali dishes, it also adds an exotic flavour to roasted vegetables, dals and rice dishes. 1/4 to 1/2 teaspoon added at the end of the cooking process or sprinkled over the dish will drastically improve many dishes. And don’t worry if you live somewhere cold or it’s raining non-stop, you can of course also roast the spices in a pan.

You will need a little mixer, coffee grinder or mortar and pestle for this recipe. 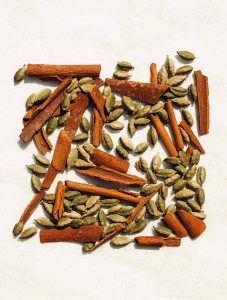 A quickly made garam masala which goes well with roasted vegetables, dals and rice dishes.

On a hot summer day lay the spices for a few hours into direct sunlight. After they have dried you can break the cinnamon bark into smaller pieces and grind the whole spices in a small mixer or coffee grinder to a fine powder. Give them through a sieve to get rid of leftover pieces of the cardamon pods.

In case you grind the spices with mortar and pestle (it seems like a lot of work, but is a lot of fun) you should remove the seeds from the cardamon pods and only used the seeds as it is difficult to powder the pods.

Store the spice mix in a dark airtight container it will stay fresh for several weeks.

Roasting in a pan:

Heat up a pan on medium heat and once it's hot add the spices. Roast them, while stirring constantly, till they smell aromatic. This will take 3-4 minutes. Then continue as described above

In India cassia cinnamon is used for cooking and thats what you need for this recipe. You will get it in any asian store, you can easily recognize the rough bark pieces which are not rolled up like the cinnamon generally used in western countries.