It almost feels like a confession, but I do have a cook. Not that he would do the cooking for my blog, but despite I’m so much into food, it’s actually not always me who is sweating in the kitchen. Half of the food we eat at home is made by him. His name is Budhan-da, actually only Budhan and the Da is the Bengali way to show respect to someone who is elder to you. 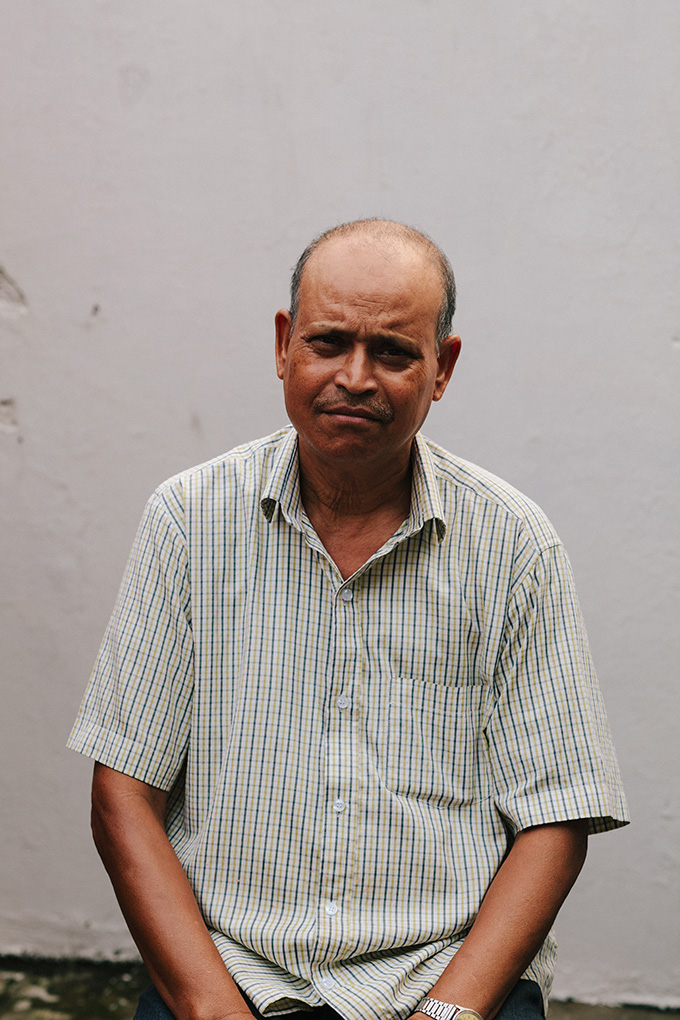 Budhan-da works in three different houses and cycles for more than 2 hours each day to go from one workplace to the next. In his lunch break he always reads three newspapers and always knows what’s going on. I think I have never seen him in a shirt which wasn’t checked. His parents where farmers in a little Bengali village, but as their land wasn’t big enough to support all of their children, Budhan-da and his brothers had to leave to find work in the city. He is warm, caring and you can always count on him. But he doesn’t like it much to cook, it’s something he has to do for a living and he often speaks about the chances he missed because he couldn’t go to school longer. His cooking is straightforward without frills or experiments. But he has a natural understanding of things we richer people have to learn again, like wasting less or using seasonal and local vegetables. If we buy something at the market which isn’t in season, he’ll scold us and says that it’ll be now our own fault if it doesn’t taste good. 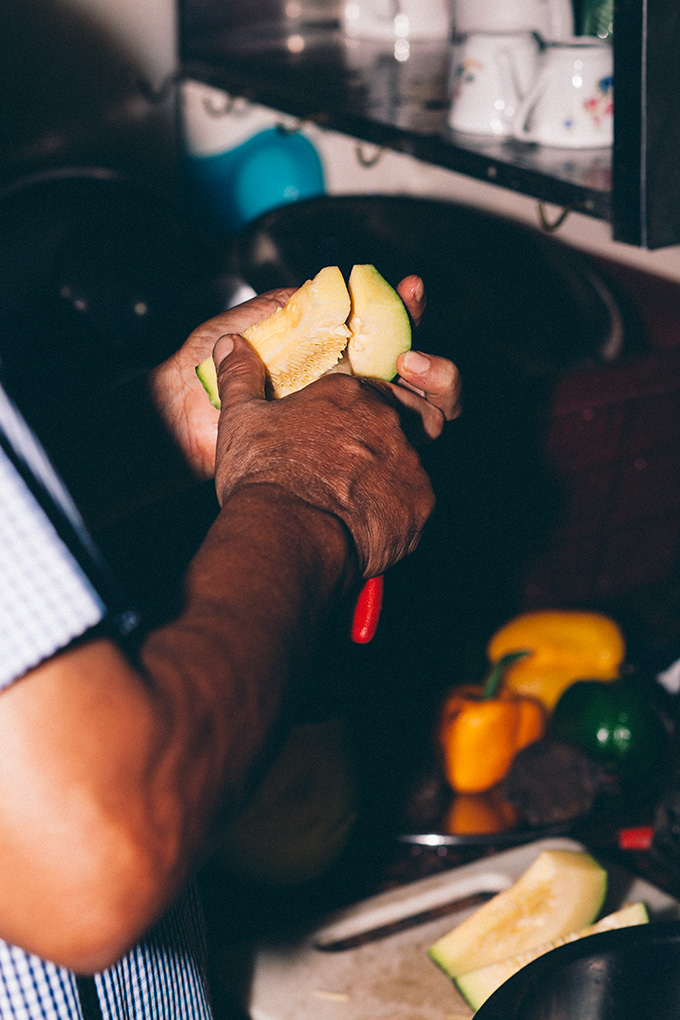 In middle-class India it is very normal to have domestic help, we have a maid, a gardener, a lady who irons the clothes and a boy who cleans the car. We are not rich, but they are poor. There are millions of domestic workers in India, but no followed laws which protect their rights. If they meet on an employer who isn’t considerate, their life can be hard. We try our best to be good employers and I think they like working at our house. But it’s difficult to understand poverty when you don’t know how it feels. Sometimes we wonder how they manage, now, as vegetable prices have risen so much. But then we shrug our shoulders and go on with our own problems.

I always look forward to Budhan-da’s arrival in the evening. He reaches around 7.30 pm and before he even starts cooking he makes us a cup of his special ginger tea. That’s the time I know the day comes to an end, our son will do his last crazy stunts before going to bed. If it’s a cold day or we feel indulgent we ask Budhan-da to make us some pakora and he’ll whip up the best pumpkin pakora in no time. 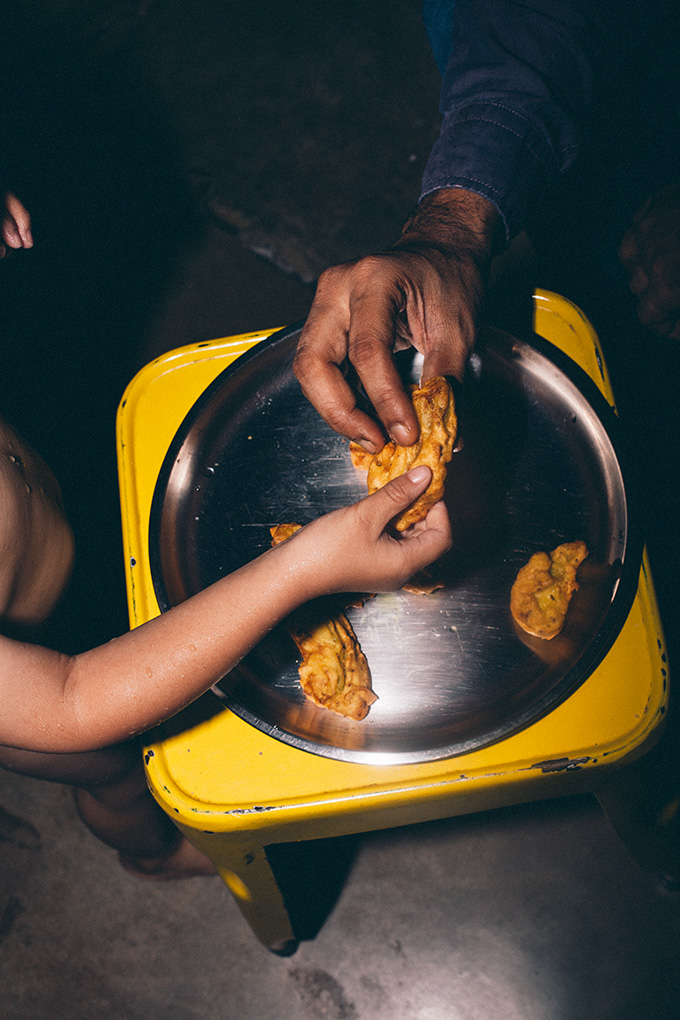 Pakora is a common Indian snack and I have eaten it hundreds of times, but while working on this post I realized that I actually never made them myself. Probably because of my fear of deep frying and also because Budhan-da was always there. They are one of these simple things which nevertheless can go wrong, my husband was laughing about my first attempt. But now I got it, although not in Budhan-da’s speed. You can make them with a variety of vegetables, but we like pumpkin pakora best. 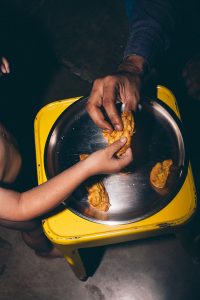 Put the water with the grated ginger in a pot and bring to a boil. Simmer for 3 minutes, then add the tea leaves. Simmer for another 2 minutes. Add the sugar, stir till it dissolves and strain into cups.

Cut the pumpkin in long, thin pieces. They should not be thicker than 0.5 cm, otherwise they will not cook through. Put them in a bowl and sprinkle the other ingredients over them (apart from the oil). If there are lumps in the besan or baking powder sieve it first.

Slowly add very little water while mixing everything with your hand. A thick clinging batter, which covers the pumpkin pieces, should form. Check if there is enough salt, otherwise add a bit more. You could also make the batter separately and then dip the pumpkin pieces in it. But Budhan-da does it this way around, which is much faster and I feel the paste also sticks better to the pumpkin.

Heat enough oil for deep frying in a karai or deep pan. Check if the temperature is high enough with dropping a bit of besan paste in it. If bubbles form around it and it floats up it’s hot enough.

Add a few batter covered pumpkin pieces in the hot oil. Be carefull as it will splutter. Budhan Da does this by hand, but you could use a spoon as well. Don’t overcrowed the pan, otherwise the temperature of the oil will drop.

Fry the pakoras for 1-2 minutes on one side, then turn them around and fry for another 1 - 2 minutes.

Take the pakoras out with a slotted spoon and drain on kitchen paper. They should be eaten immediately and are nicest with some chutney or ketchup.