I learned this recipe from Rita, a young woman who worked for a family in our neighbourhood. Rita is from a small village in Odisha, one of the poorer states of India where over-population, deforestation, missing monsoons and the resulting meager harvests often force people to migrate to other parts of India.

Such was the fate of Rita’s family. Her brother had already left the village and when they got an offer for Rita to work as a nanny in another town, they readily agreed. And so she started working in our town, 2000 km away from her home. Our son played often with the girl Rita took care of and we met them almost daily at the playground. We often chatted with her and all seemed well. Till one day we got to know her real story – she got regularly beaten by her employer, wasn’t allowed contact with her own family and on top of everything she had never seen any salary. We were shocked. We never expected something like that to happen in our neighborhood. Rita had silently endured for a very long time, but after 3 years she gathered all her courage and asked us and other people in the neighborhood for help. And she was lucky, she found people who could help her and bring her back to her village.

Before her journey home she spent a few days in our house and during that time she taught me this aubergine dish, which her mother likes to cook. The aubergines are fantastic – mildly spiced in sweetish yogurt, sprinkled with mustard seeds and curry leaves. But it’s difficult to find a bridge from Rita’s story to the recipe. I actually was not even sure if I should write about her at all. To write about abuse and exploitation on a food blog somehow felt awkward and inappropriate. But then I wondered why ?

A study from 2016 implies that 46 million people today live in slavery, many of them work in agriculture. Whenever we eat a piece of chocolate or a tomato, it’s actually possible someone like Rita has toiled away for it without being paid an appropriate salary. The world of food production is a much sadder place than we would want it to be and maybe we should wonder why there are only so few food bloggers who write about it. Yes, you can read about it in the newspapers and admittedly they write much better than I do. But if we already write so much about food, shouldn’t we at least sometimes write about the darker sides too ?

Rita has a telephone now. She calls us from time to time and sends pictures on WhatsApp. In one of those pictures she wears a yellow sari and beams from ear to ear. She looks like a normal, young woman who likes to dress up and is excited about a new sari. It should have never been different.

Here is Rita’s recipe, in her family they eat it together with a simple vegetable pulao, but it also tastes wonderful with some flat bread or just as it is. 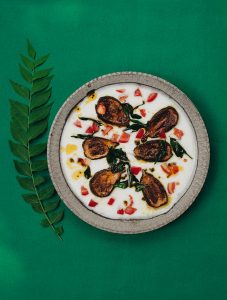 Wash and dry the aubergines, then cut them according to their seize either in half or quarters. Mix the salt, turmeric, cumin and chilli powder and rub this mixture onto the aubergine pieces.

Heat a good amount of oil (at least 0.5cm) in a heavy bottomed pan till it’s almost smoking. Fry the aubergines nicely from all sides, then reduce the heat and continue to cook them till they are soft. Set them aside.

Mix the yogurt with the salt, sugar and tablespoon of water. It should taste slightly sweet and be the consistency of a thick milkshake. Pour the yogurt in a shallow bowl and distribute the aubergines on top.

As the final seasoning you have to prepare the tarka - heat the oil in the smallest pan or pot you have over medium heat. Once it’s hot add the mustard seeds and red chilli. Once the mustard seeds start to pop add the curry leaves and fry them for a few seconds. Immediately pour the oil and spices over the yogurt and aubergines. Sprinkle withe chopped tomatoe and serve with rice, flat bread or just as it is.

A tarka is a small amount of hot oil which gets infused with spices and poured over the final dish. It’s a very simple, yet effective technique and you only have to be careful to work quick and don’t let the spices burn.